AyushmanKhurana in trouble over IVF baby remarks
Actor AyushmanKhurana, who plays a sperm donor in his debut flick, Vicky Donor, has ruffled many feathers with his real-life remark — “This is the age of designer babies”.

IVF (In Vitro Fertilisation) clinics are miffed that he used the term ‘designer baby’, and say that he made the insensitive remark to promote his film. 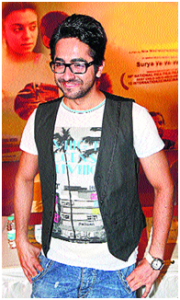 “In 2004, I did it (donated sperm) as part of the reality show, Roadies. I will do itagain. This is the age of designer babies. Parents choose donors for a particular trait in their children,” he told us in an interview.

“I am shocked that he says that this is the age of designer babies. Creating designer babies is criminal. Khurana has irresponsibly encouraged sperm donation like a profession,” says Dr Rita Bakshi of International Fertility Centre.

The doctor further argues that Khurana should not talk about medical processes without in-depth knowledge. “It’s silly to use the term ‘designer babies’. No one is designing a baby.